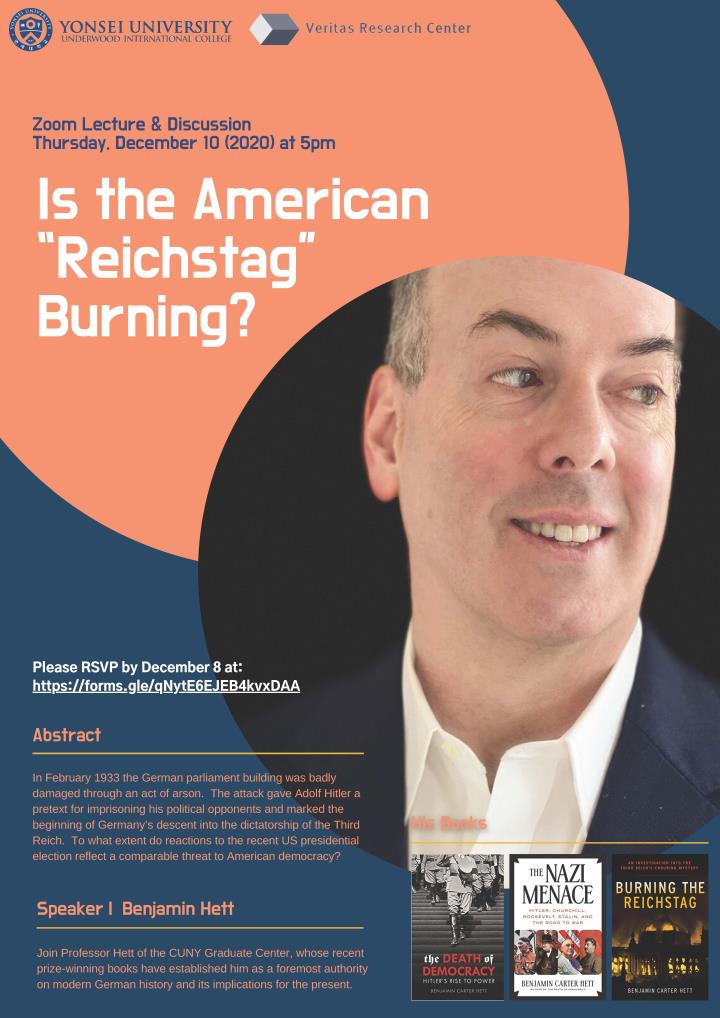 On December 10, Dr. Ben Hett, Professor of modern German history at the CUNY Graduate Center (New York City), gave a Zoom talk titled “Is the American Reichstag Burning,” organized by Professor Robert Beachy and sponsored by the Veritas Research Center.  The title of Professor Hett’s talk refers to the German parliament building and the 1933 arson that allowed Hitler to seize power in Germany.  The larger focus was on the rise of Nazism and its historical relevance for understanding American politics and the recent presidential election.  Drawing on his recent book publications (including The Death of Democracy: Hitler's Rise to Power and the Downfall of the Weimar Republic), Professor Hett discussed how the political norms of Germany’s democratic Weimar Republic were increasingly undermined in the late 1920s and early 1930s, and he found certain parallels in the American political culture of the last four years of the Trump presidency.

The comparison appears now to have been somewhat prescient, at least considering the storming of the Capitol Building, the seat of the American Congress, by Trump supporters on January 6, and their attempt to subvert the results of the November election.  This American insurrection ultimately failed, of course, unlike that of the Nazis.  But Professor Hett also emphasized how the “big lie,” purveyed by former President Trump and his supporters, that the November election had been stolen might have lasting damaging effects. Here the lessons of German history became particularly clear.  At the end of World War One in 1918, conservatives explained Germany’s defeat as the result of a conspiratorial “stab in the back,” for which German Jews and Social Democrats were considered responsible.  The “stab-in-the-back” myth ultimately fed fascist and Nazi propaganda, undermining the democracy of the Weimar Republic.  Similar claims by Trump and his supporters about a conspiracy to “steal” the November presidential election – claims which have been repeatedly disproven (including by nearly 60 court decisions) – have already worked to undermine the confidence of many in the fairness of American elections.  The talk was “attended” by more than 25 students and faculty and followed by a lively Q&A session.